Stumped by track’s closure | The Star


CYCLISTS and joggers are upset over the closure of a popular cycling and jogging track to facilitate works on The Light Interchange along the Tun Dr Lim Chong Eu Expressway in Penang.

The interchange, which includes the building of new elevated ramps connecting to The Light Waterfront City and widening of Tun Dr Lim Chong Eu Expressway, is scheduled for completion in December 2024.

Engineer Lim Boon Beng, 43, said his weekly exercise routine has been disrupted as he does not get to cycle or jog to Karpal Singh Drive from his condominium since the path was closed off to public. 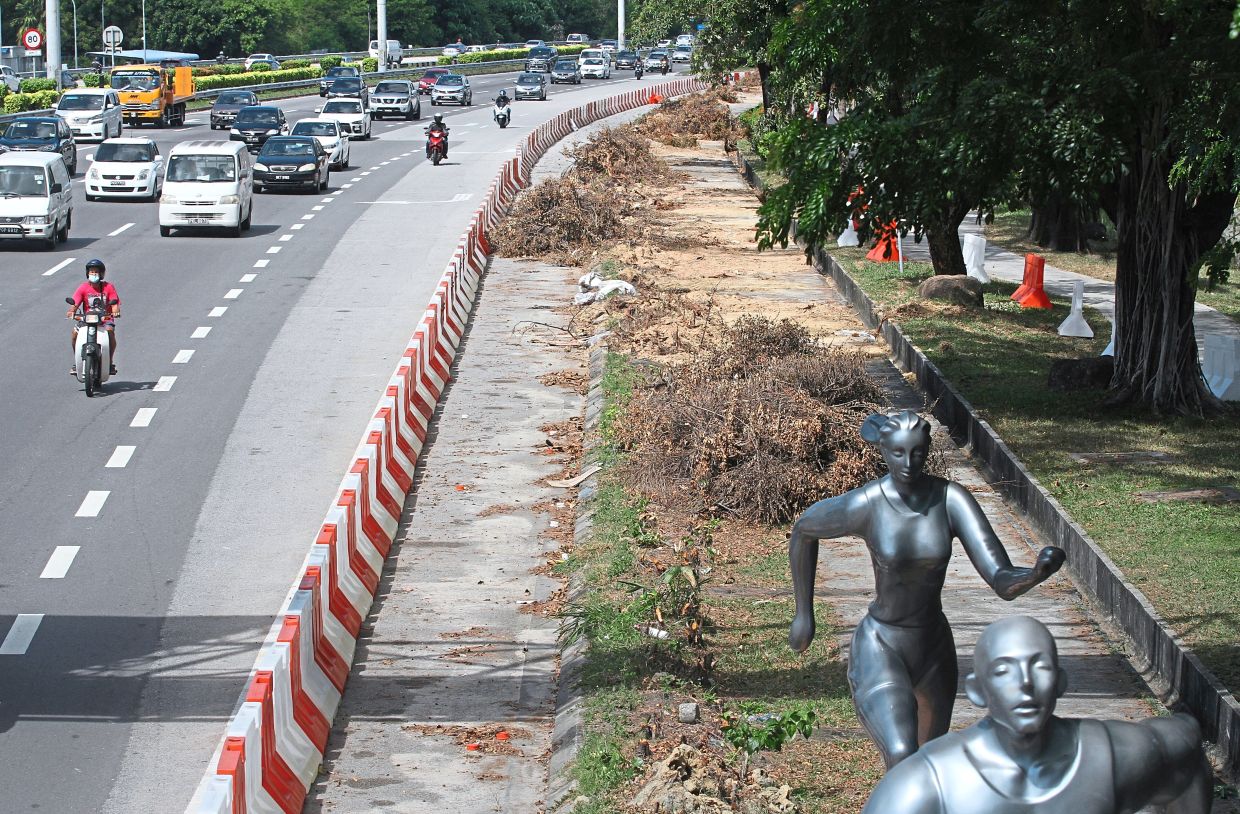 Construction of The Light Interchange, which is due for completion in November 2024, will result in the closure of the Bayan Lepas Bound emergency lane, existing walkway, bicycle lane and median. — ZHAFARAN NASIB/The Star

“The consolation is I still get to exercise parallel to the path, which runs through the Linear Park leading to the Penang Bridge.

“I fear that this will soon change because work seems to be starting at the park too.

“The park looks like a ‘war zone’ with cement slabs dug up and tree stumps lying along the path. This makes me sad but I guess that is the price of development,” he said when interviewed.

Retiree V. Selvam, 68, used to take long walks along the cycling track from his home in Jalan Pantai Sinaran to Karpal Singh Drive, a few times a week, to have breakfast with his friends.

“But I can no longer do this as road barricades are blocking the path’s entrance. 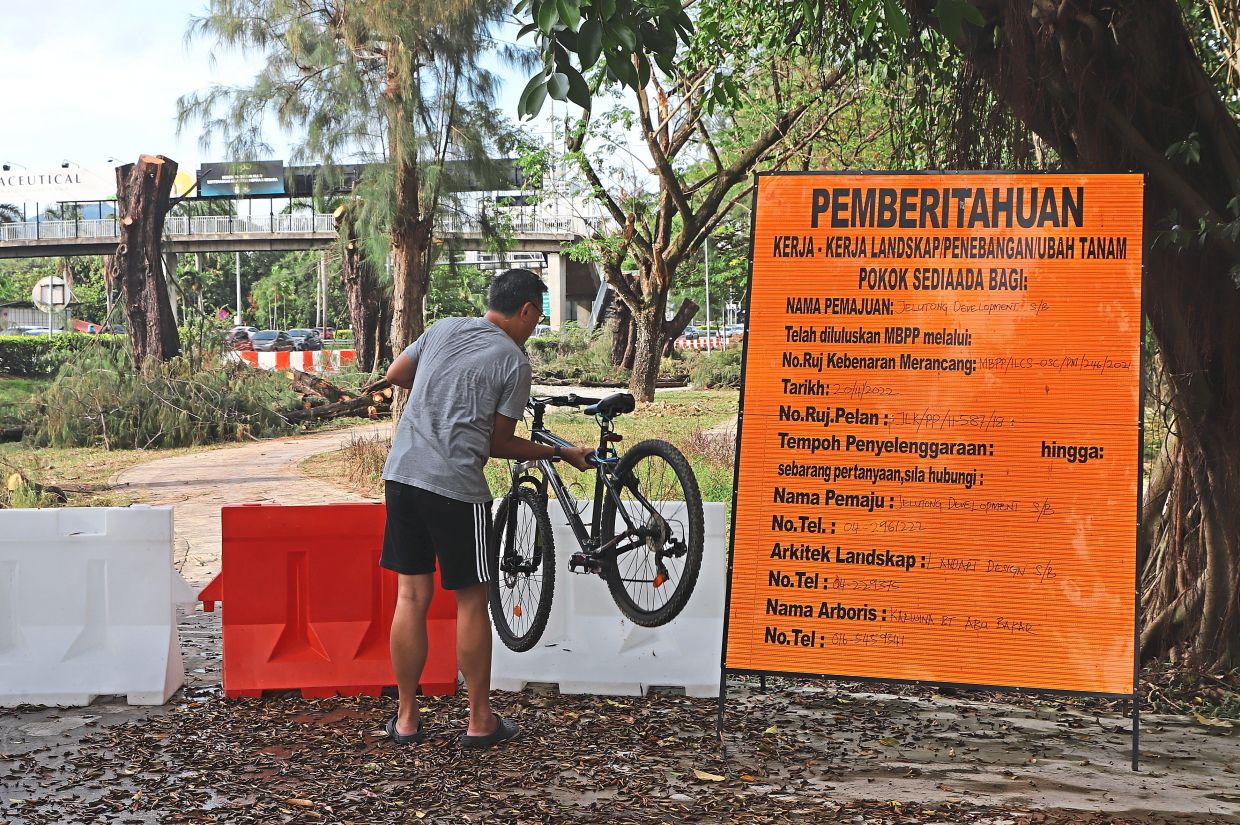 A cyclist carrying his bicycle over road barriers along the track leading to the Penang Bridge.

“Now, I have to drive to Karpal Singh Drive to meet my friends.

“I hope that the track reopens soon,” he added.

Avid runner Lily Tan said she would have to find an alternative route for her daily jogs now that her usual running path was closed.

“I love running along the cycling-jogging path because the area is peaceful and serene.

“There is a lot of greenery and trees along the path helping shade us from the sun and heat while we exercised.

“I am going to miss jogging along the cycling track for a while. p3 optionTrees chopped down along the bicycle path to make way for The Light Interchange along the Tun Dr Lim Chong Eu Expressway. — ZHAFARAN NASIB/The Star

“It is also the path that I use when training for upcoming marathons and other running events. Sometimes, I cycle along the path too,” said Tan, who is in her 30s.

Launched in October 2012, the bicycle track is a collaboration between the then Penang Municipal Council (MPPP), now known as the Penang Island City Council (MBPP) and five property developers.

It is part of the state government’s Bicycle Lane Master Plan, an ambitious but well-received project to create 120km of bicycle lanes encircling the island with another 80km on the mainland.

IJM Land northern region general manager Goh Su Yin said in view of public safety and security, the company had decided on taking precautionary measures to close the track due to ongoing construction works in relation to interchange.

“We made the decision after much deliberation as IJM Land has been actively maintaining the track as well as carrying out landscaping in the Linear Park at a cost of RM13,000 per month for the past nine years as one of our corporate social responsibility (CSR) projects. “The park’s ownership is shared by the Malaysian Highway Authority (LLM) and Department of Irrigation and Drainage (DID).

“The front portion of the park sits on LLM’s right of way while the other half, which is a reserve for storm water discharge, is under DID’s purview.

“The construction of the interchange will result in three road junctions and a few elevated flyovers along the existing park hence ensuring public safety is imperative resulting in the decision to close the track,” she said in a statement.

However, Goh said there was good news in store as IJM Land was working to create an alternative and better cycling path, which was targeted for completion in July.

She, however, said this timeline was subject to change as the construction progressed.

“The path leading to the Penang Bridge will be open until work starts in the area.

“In the future, access for cycling and jogging will be available along The Light City waterfront’s promenade when the development is completed,” said Goh.

She also revealed that a total of 92 trees were chopped down of which 10 comprising the yellow flame (Peltophorum pterocarpum) and rain tree (Samanea saman) species were transplanted nearby.

“Meanwhile, the rest could not be transplanted due to certain reasons such as root and trunk decay.

“We only chopped down the trees after an MBPP arborist did an extensive inspection and gave the necessary approvals.

“Once the interchange is completed, the maintenance for the Linear Park might be adopted by the MBPP subject to approvals from both LLM and DID,” she added.

These improvements are expected to enhance the current infrastructure system and better serve the public.

Phase One will involve the closure of the Bayan Lepas-bound emergency lane, existing walkway, bicycle lane and median, which will be carried out until November 2024.

Goh said the pedestrian bridge nearby the Caltex petrol kiosk, along the expressway, was scheduled to be demolished next month (after Thaipusam on Feb 5), while the other one next to the Coastal Runners statues would be demolished in March or April.

“IJM Land is committed to mitigating the impact of construction works by implementing a traffic management plan during the entire construction period by carrying out temporary traffic diversions or road closures during off-peak hours (10pm to 5am) to reduce impact on road users,” she said.

Meanwhile, access to a 500m beach stretch, which is popular with families, anglers and clam diggers, located along Persiaran Bayan Indah has been closed off to the public for a 24.72ha land reclamation project for the Penang World City township.

Technician Mohd Nazri Aziz, 47, who lives in Seberang Jaya on the Penang mainland, visits the beach almost every weekend to dig for clams and goes swimming with his wife, five children and relatives.

“But on last Jan 15, I arrived to find the entire beach stretch boarded up with ugly green hoarding without any alternative access.

“I have been coming to this place for quite a number of years.

“After a hard week at work, I like to come here and relax with my family. We would sometimes set up a tent and cook simple dishes and then sleep after a heavy meal.

“I guess it will be a few years before the reclamation project is completed. The landscape will be different and I will miss this place very much,” he said.

Mohd Nazri said as a born and bred Penangite, he feels the state was being developed too fast, adding that the Penang government should slow it down a little as there was too much traffic on the roads.

“Instead of building more roads, the state government should improve on the public transportation system and build more bicycle lanes to encourage more people to cycle.

“Everywhere I go nowadays, especially on weekends and public holidays, I see many people everywhere.

“If I had a choice, I would use my motorcycle when going out but I don’t have that luxury as I have a family,” he said.

Attempts by The Star to find out more about the reclamation were unsuccessful, and calls to the company undertaking the project (as stated on the information board) were met with indifference.

All of the staff said was that the company had all the permits from the authorities and that reclamation would start soon.

Firm gives back to community at Christmas, gifts food, others to widows in FCT | The Guardian Nigeria News