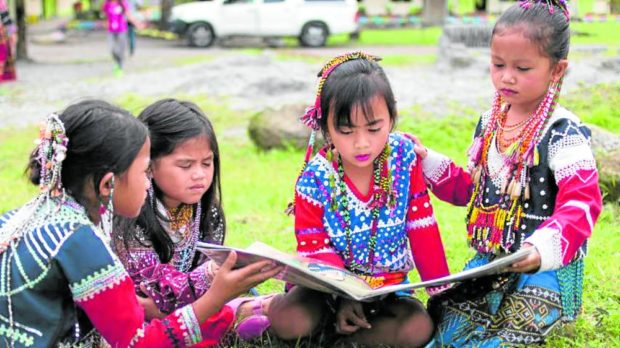 LEARNING ROOTED IN TRADITION | A corporate initiative that revived the B’laan art of storytelling in Sarangani province has been recognized as one of the most outstanding literacy programs in the country. (Photo courtesy of CLAFI)

MANILA, Philippines — In the southern part of Mindanao, the B’laan indigenous community has a unique storytelling tradition called “flalok” that once thrived in the past but gradually faded with the rise of modern technology.

To revive and save this cultural B’laan treasure, the Conrado and Ladislawa Alcantara Foundation Inc. (Clafi) developed the “Flalok Project” and produced books preserving the tribe’s oral narratives in printed form.

Flalok, basically a vessel for a body of folklore handed down through generations, may be likened to bedtime storytelling.

But rather than putting the “lumad” kids to sleep, it is now being used to rouse and sharpen their senses as young readers.

The project is under the foundation’s “Bukas Kaalaman Program: Pagbasa at Pag-unawa Para sa Kaalaman at Kinabukasan,” which won second place in the 2022 National Literacy Awards for outstanding literacy program. The awards were given by the Department of Education (DepEd) and the Literacy Coordinating Council in December last year.

Clafi is the corporate social responsibility arm of the Alcantra Group of Companies.

“One of the pressing issues that Clafi identified is the lack of learning materials in the mother tongue, particularly for B’laan communities in Sarangani province,” said Cecile Dominguez-Yujuico, Clafi president.

In partnership with Gerry Roxas Foundation through the PhilAM Fund, and with sponsorship from the United States Agency for International Development (USAID), the foundation collected and documented 144 flalok stories from various B’laan sources.

The project team then collaborated with tribal leaders, elders, and DepEd public school teachers of B’laan heritage to create materials such as storybooks, teaching guides, and alphabet charts.

Manilyn Sinon, a B’laan teacher, saw up close how the children struggled to read because the lessons were taught in English and Filipino.

“I orally interpreted the lessons in B’laan, otherwise they wouldn’t understand anything,” said Sinon in an interview with USAID.

When the Flalok Project reached her community, she said, “I wish we had these books when I was still studying.”

The books and the other learning resources were developed from 2015 to 2018 and were integrated into the Mother Tongue-Based Multilingual Education (MTB-MLE) curriculum of the DepEd. A total of 130 schools — in Sarangani, South Cotabato, General Santos City, Koronadal City, and Sultan Kudarat — now implement B’laan MTB-MLE.

“These materials were complemented by mother tongue textbooks for learners and teaching guides for teachers,” Dominguez-Yujuico said.

Much attention is given to the illustrations to make sure they “accurately portray different facets of B’laan culture: the characters, traditional practices, clothes, tools and weapons, and even the landscape,” according to the preface of one of the books.

Under the project, a class focuses on one storybook per week. One of the 36 titles intended for Grade 1 pupils in their B’laan MTB-MLE class is about “Yah Tmagak Banwe,” or “The Young Woman Who Left Her Place,” which tells the story of an orphan named Yah who was forced to leave her village because of a severe famine.

In her search for food, she reached the top of a hill where she saw a rather backward, somewhat traumatized group of people who, because of some primeval fear of fire, would rather eat the feathers of raw chicken and rice bran (darak) instead of cooking them first.

When she tried igniting a flame using stones, the people panicked and revealed the source of their pyrophobia: they earlier lost their homes to a big fire and survived with only the clothes on their backs.

But after teaching them how to cook food safely, Yah earned their trust and was allowed to stay in the community, where she eventually became a “bai” (princess) and married the “datu” (king).

The story doesn’t end there for there is still a twist: The couple found out they were actually betrothed to each other when they were still infants in the famine-stricken village, and eventually, they decided to go back there with their newborn.

According to Clafi, stories like these enabled the Flalok Project to not only improve the reading skills of B’laan children but also heightened their sense of identity and appreciation for their cultural heritage.

Richlie Lyndon Magtulis, Clafi executive director, said around 15,000 B’laan learners have so far benefited from the project, as shown by their average score in a post-program literacy evaluation wherein they improved to 88 percent from only 58 percent.

Aside from the Flalok Project, Clafi has another literacy initiative called “Summer Big Brother” (SBB), a summer remedial program for students who need to improve their reading comprehension skills.

SBB started out as a collaborative effort between the foundation and the provincial government of Sarangani in 2007 and was later adopted by more communities in Iligan City, Compostela Valley, Zamboanga, and Davao.